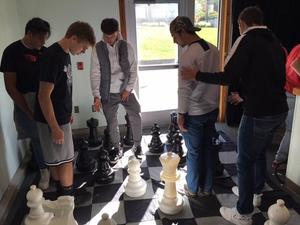 On Wednesday October 9th Senora Cobb took a very large group of students to Peninsula College to watch the Teatro Milagro production of Judge Torres. Afterwards, with time to burn, did various activities including life-size chess.

For the sixth year in a row, Spanish students at Crescent High School had the opportunity to attend a bilingual play at Peninsula College.

This year's play was Judge Torres and was performed by Teatro Milagro, a bilingual theater troupe from Portland, Oregon.  The play told the true story of Xiomara Torres, originally an undocumented immigrant from El Salvador, who crossed the border into the United States at the age of nine.  Torres was also a victim of child abuse, which led her to be placed in the foster care system as a 13 year old.  Against all odds, Torres graduated from college, then law school, becoming a fierce advocate for the rights of children.  In 2017, Governor Kate Brown appointed her to be a judge for the state of Oregon.

Judge Torres was an inspiring story for anyone to see and also an opportunity for Crescent Spanish students to be exposed to authentic Spanish spoken by native Spanish speakers.

When the play was over, students had the opportunity to relax and played ping pong, life-sized chess, and checkers, as we waited for the bus to come back and get us at the end of the day!